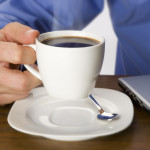 If you’re reading this while participating in a webinar, eating a sandwich, and periodically checking your email, please stop! Multitasking will ultimately reduce your productivity, strain your focus, and produce poorer results, for two reasons:

If you don’t believe this, try this exercise and see for yourself. Take out a blank piece of paper and write the word multitasking in upper case letters. Then, below the word, write the numbers 1-12, one number beneath each letter, like this:

You did that relatively quickly and easily, right?

That was considerably more difficult and took much longer, didn’t it? Switching back and forth between writing a word and writing a sequence of numbers cut your productivity and probably, created some strain. Remember this exercise the next time you’re tempted to multitask. In the long run, you’ll find that focusing on a single task will make you better and faster at it – and far less stressed.